The phases of an app development 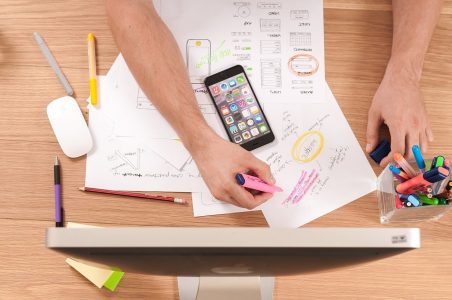 Bringing a new app to market – during app development, agencies and their client developers go through various phases. Software specialists refer to this as the Software Development Life Cycle. We reveal the model behind this in the blog post.

Project planning as a basis

“Simply going at it without a plan” usually goes wrong. This also applies to the development of an app. In order to program an app from an idea, project planning is indispensable. Various approaches describe the workflow of an app development. Some concepts are based on the classic waterfall model. It is roughly composed of the following phases: Planning/Definition, Concept/Design, Implementation, Testing and Delivery/Maintenance. Of course, app developers and their customers need to determine which phases lead to the goal before the project. So there is no pattern F, as each project is individual. Nevertheless, the following steps are intended to illustrate a flow of an app development as an example.

The first phase of app development

The customer has an idea for an app. With this, he turns to an agency that specializes in app development. During a face-to-face meeting, the project partners involved establish basic principles. All results are recorded in the specifications and requirements document. The first document describes what the app is to be used for and how it is to be used. This includes use cases and non-functional requirements such as performance or extensibility. The requirements specification then forms the basis for the technical specification – the functional specification. This is about how and with what a solution will be developed. The detailed concept provides information about the effort required for the project.

The hot phase: Programming can begin

First, app developers design a concept. Among other things, they sketch out the app’s graphical interface. A sitemap also describes how the various pages and views are linked to one another. This involves the structure of the app. The app developers then work on the programming. In the meantime, coordination usually takes place between the customer and the agency. This gives customers an insight into app development. In addition, the programmers can then implement changes and corrections if desired. Many agencies give their customers alpha and beta versions at an early stage of development.

Once all requirements have been met, the final acceptance of the app takes place. According to the holistic support approach, agencies accompany their customers beyond this and also take over the publication of the app. Users can then download the app via various stores. The final step is maintenance and support. In concrete terms, this means eliminating bugs or adapting the app to new operating system versions. In this way, the app developers ensure quality and make sure that the app works.